Feminists create a shirtstorm because they hate astronomy.

So.  We, meaning the human race, just landed a probe on a comet.  This is the first time evah, making it the biggest deal in space and rocketry in…heck, I dunno, decades.

You heard about it yet?

If you have, then you’ve probably already heard the latest hissy fit.  One of the lead scientists was wearing a shirt during the interviews.  Outrageous!  How dare he wear a shirt?! 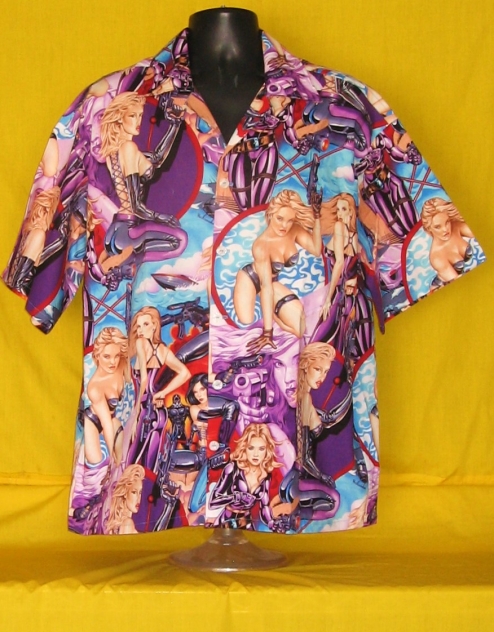 Let’s be honest:  that thing is not what you would call classy.  And you can buy it here!  I’d kind of like to buy one, just to cheese off the wimps, but it would be wasted money.  I don’t wear clothes that my mother would shudder to see.  My parents don’t get honored mearly as much as they should, but that’s one small contribution.

Anyway, obviously this was a golden chance for attention-whoring feminists to take a transcendent accomplishment and make it all about them.

“I don’t care what scientists wear. But a shirt featuring women in lingerie isn’t appropriate for a broadcast if you care about women in science.”

Er…those shirt babes are wearing lingerie?  Holy crap that’s scary.  What’s their fetish wear, depleted uranium?  Or perhaps Dr. Katie Mack has the fashion sense of an astrophysicist.  But give her mad props anyway, for a pretty level-headed reaction.

Anyway, Dr. Matt Taylor swiftly apologized.  Tearfully, sniff.  Oh, Matt, you sweet little moron.  For an encore, why not cut your legs shaving and then wade out into the piranha-infested Amazon River?

Had all the objections been like Dr. Mack’s, “that shirt wasn’t appropriate to this situation, and an apology would be in order”…well, that would make the objectors civilized.  And some, like Dr. Mack, certainly are  But of course a million times more heat than light was generated by this mistake.

“No no women are toooootally welcome in our community, just ask the dude in this shirt,”

And that’s still one of the temperate reactions.  Here’s a few more.  They’re still not nearly as bad as the GamerGate hatred, but then the gamers are fighting back.

But c’mon, whiners.  Your every action proclaims your belief that women are weaker than men.  When men point out that it’s unwise for women to dress provocatively when getting publicly drunk or going through bad neighborhoods, OUTRAGE!  “Damn your Patriarchy!  Women should be able to wear whatever they want, anywhere they want, without fear of consequence!”

Admittedly, in a Perfect World™, that would be true.  Every male would be a strong and moral man, and evil would not exist.  No doubt the progressive State will someday get us there.

And yet…these Social Justice Warriors, those who believe they can purge wickedness from the human heart, keep growing more and more…well, the only correct word is “pathetic”.  They blame a crass shirt for keeping women out of Science!

P.S.:  Since astronomy is the study of Heavenly Bodies, I think that shirt might have been appropriate after all.

19 Responses to Feminists create a shirtstorm because they hate astronomy.