Haven’t been checking the comments carefully enough, because there have been so few lately.  Of course that “because” is unfair, since one reason that remarks have dwindled is that they weren’t read and responded to in a timely fashion.  Slow, slower, slowest…it’s a viscous circle!

Here’s xpat’s comment, where he wanted some football explanations after the BCS…ROLL TIDE!…championship game.  Now that he and everyone else has moved on, let me reply to his questions.

In a matchup of programs tied for the most AP national championships with eight,

This tells me that he was reading an Associated Press story.  The AP starting proclaiming champs in 1936.  The first collegiate “season” was back in 1869, if you can have a season of two games between two teams (Princeton and Rutgers).  Football gradually became more challenging, obviously, but the early years of foosball are why Princeton can lay claim to 28 national titles.  Snort.

Please also note that it is an absolute disgrace that Notre Dame has eight AP titles and Alabama doesn’t have ten.  The AP vote in 1966 utterly robbed the Crimson Tide, as sports journalism did its part in fighting “discrimination”.  This was accomplished by lumping all Alabama players and fans together and punishing the innocent majority for the wrongs of the few.  Yes, the AP has been blind to irony for generations.

Notre Dame (12-0) had allowed only two rushing touchdowns in its surprising run to the championship game.

Don’t know how to simplify this one.  You score touchdowns by running the ball in (rushing), passing it in, or off turnovers (the defense takes the ball away and runs it into the endzone).  Giving up only two rushing TDs all season IS exceptional, assuming you don’t give up forty passing touchdowns or something.  Of course, Stanford was about the only opponent Notre Dame had faced that was even remotely comparable to the Tide.

…but Notre Dame was flagged for interfering with the catch, though it was one of Jones’ teammates that made contact with him.

The rule is that defenders cannot approach within one yard of the player once a fair catch is signalled.  The Notre Dame player got too close, as the article failed to mention.  You see why I hate Catholic sportswriters?

A screen pass is one which is mostly to one side, rather than downfield.  “Downfield” is the direction of the endzone you’re trying to reach.  Obviously the recipient of a screen pass tries to go downfield after the catch.

Lacy set up Alabama’s second touchdown with another 20-yard run, this time to the Irish 2. Instead of running into a Notre Dame goal-line defense that has become known for goal-line stands,

A football field is 100 yards long.  If the defenders are on their own “2” (yard-line) they are two yards away from giving up a touchdown.  A goal-line defense is when you’re within ten yards of your own goal.  A goal-line stand is when you “stand your ground” and don’t give up the touchdown.

Yeah, I don’t even notice the context unless someone points it out.  “3 for 3” meant three touchdowns on three possessions.  “from a yard out” means that Notre Dame was on its own 1 yard-line at the start of the play.

But the folks in Crimson and houndstooth were making all the noise as the Tide rolled.

Ah, houndstooth.  Alabama may be the buckle of the Bible Belt, but it still has problems with idolatry.  The houndstooth hat is a holy artifact of The Bear god. 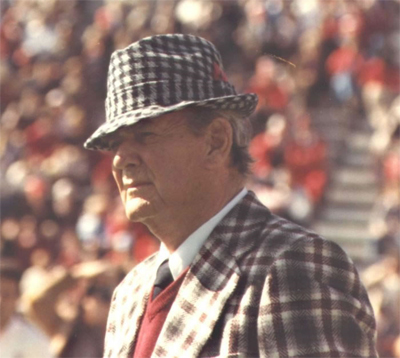 The Southeastern Conference, winners of the last six BCS championships, was storming toward seven in a row.

SEC teams have won the last seven national titles, to the outrage of all other, lesser conferences.  Some Alabama fans would rather Auburn lose a championship game than uphold the superiority of the Southeastern Conference; the German Science Babe, my brother, and I are not among them.

Notre Dame had only five first downs in the half and allowed 309 yards. The Irish defense came in allowing 286 per game.

“Total yards” is how much ground the defense surrenders to the offense from both rushing and passing plays.  The article is saying that Notre Dame gave up more ground in half of a game than it usually did in an entire contest.  But again, the teams they had played weren’t up to the caliber of an SEC champion.

McCarron threw 18 passes, of which 12 were caught.  Alabama gained 156 yards on those twelve plays.

Alabama was trying to become only the third team to win three national titles in four seasons since polls started being used to crown champions in 1936.

Football is too punishing to allow as many games as basketball or baseball, so it can’t have the same extensive playoffs as other sports.  College basketball has a 64-team playoff; that’s half of an entire football season!  And thus the voting, which  allows  Catholic sportswriters to vote for Notre Dame even when it is obviously inferior.  In fact (thanks to a secret papal edict) I believe they are required to do so.

Still with me?  Wow, you deserve a reward.  How about some pictures of bare babes? 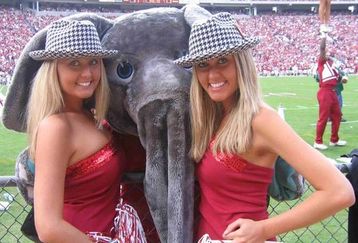 Yeah, trying to jump right in to an unfamiliar lingo is tough.  I don’t think football is worse than baseball, though.  Tried to find a YouTube clip from Blast from the Past, where Christopher Walken tries (over the course of years) to explain baseball to a son who’d spent his entire life in a fallout shelter.

I spent much of my youth obsessed with baseball and yet cricket boxscores remain utter gibberish to me, despite cricket being a mutant relation to America’s Pasttime.  But while sports terminology can be murky, some things transcend language: