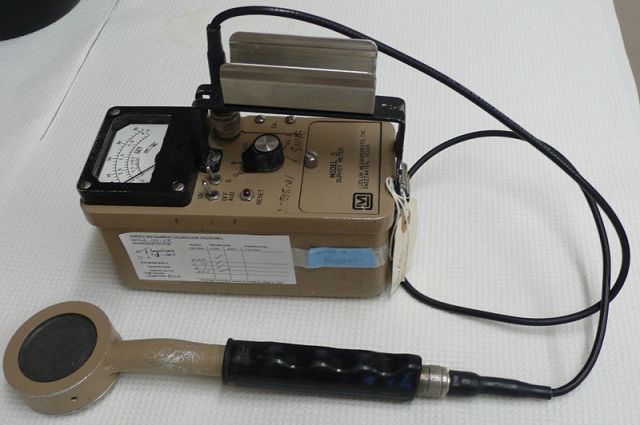 So naturally she waved it over a pile of magnetized metal and reported “two rad”.  (“rad”=radiation absorbed dose)

That is, of course, a big terse pile of WRONG!  GM instruments see counts, not dose*.  And here’s a pro tip:  measure the time interval along with the radiation.  This provides a dose rate, information which ranges between “interesting” and “life-saving”.  To wit:  assuming she had the proper instrumentation, let’s say Astrid…

…mmm, multi-talented many-fauceted** Astrid…actually detected “two rad” in a second or two.  That dose rate is some 500,000,000 times greater than the usual gamma background.  Three to six minutes of it is possibly fatal, more than fifteen minutes is lethal for sure.

In other words, typical Hollywood precision.  It’s the rule, not the exception.  But Fringe added a brand-new and satisfying mistake.  Everything was magnetized!  All of our rad detectors–GMs, ion chambers, sodium-iodide, etc.–fail within strong magnetic fields.  Plus they all fail in identical fashion:  the reading falls to 0.

I once had to survey a RHIC enclosure while its giant-sized magnet remained energized.  Those suckers are so strong that people with pacemakers can die from thinking about them.  And so I marched in with my trusty Ludlum micro-R instrument…

…which promptly crapped out eight feet from the magnet.  And then this happened:

Er…I got better!  And so thank you, Fringe, for an unexpected (and thus fun) radiological error.

(* Yes yes, I know Teletectors display dose rates, but those are calculated from the counts actually detected.)

(** It was delightful to learn that she’s also from Birmingham, Alabama…and less so to find out she “plays for the other team”.  Not that your host was ever in her league.  Anyway, he doesn’t even suit up and take the field anymore, so who cares?)

I've accepted that all of you are socially superior to me. But no pretending that any of you are rational.
View all posts by wormme →
This entry was posted in Atomic Anecdotes, T.V. shows. Bookmark the permalink.