I’m a proponent of wealth inequality, the more the better.  However, leave it to Obama and the statists to screw things up so thoroughly that elaboration is needed:  Not all inequalities are equal.  Duh.

The poorest are the same as always:  they got nuthin’.  Millions of Americans are now closer to that state, with middle class wealth getting hammered.  Flattened.  Even more delightful to leftists, wealthy people are falling back into the middle class.  Yay, wealth equality!

Well…one little problem…the “top 1%”.  Obama demonizes them in speeches, but under his crony capitalism the evil “top 1%” did quite well.

Obviously you increase wealth inequality by taking from the middle class and giving to the rich.  We could turn America into a land of 300 million paupers and 1 Sixty-Trillion-Dollar-Man, which would maximize inequality.  But that doesn’t ring my Bell:

In addition to being evil, it would be completely abnormal.  And “normal” comes in a lot of shapes and sizes: 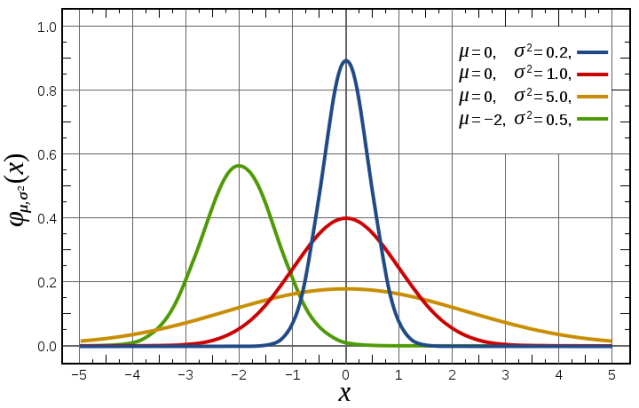 So…I’m saying that human wealth should be distributed normally?  Nope!  Why, my vision is positively skewed:

For most of its history, the American government didn’t put its thumb on the economic scales.  Or at least it didn’t push very hard.   But these days it’s not satisfied with just being the referee.  It wants to be a superstar player and a team owner and a TV broadcaster and get a big cut of hot dog and T-shirt sales.  It argues for this wealth redistribution on the grounds of “fairness”.

And this is how it skews the normal distribution of wealth:

What if everyone was limited only by ability and conscience?  That would give an unskewed normal distribution of wealth.  But the seven deadly sins ensure that life would usually be Hobbesian:  “solitary, poor, nasty, brutish and short.”  Almost a zero-sum game, in fact.

But suppose society agreed that individual wealth would be determined by:  standards of right and wrong; unalienable human rights; strong but limited government; equality under the law?

In that case, the government is the referee and not a player.  And by enforcing the rules it marginalizes the zero-sum and (God help them) negative-sum players.  The result? 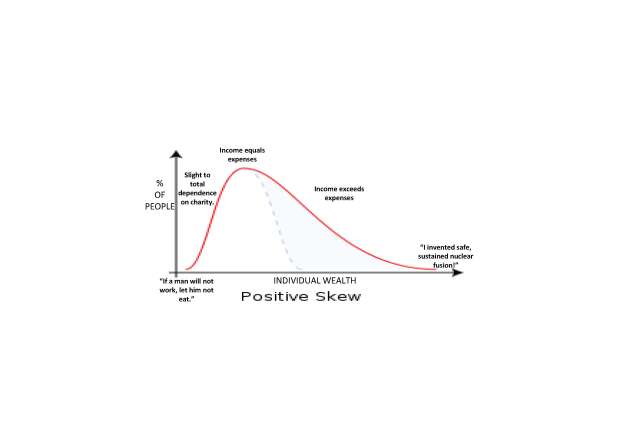 Notice that economic philosophy itself changes between the skews.  When the government caps individual wealth and subsidizes poverty with constantly changing rules, the dominant consideration is government behavior.  But when laws are minimal, fair, consistent, and strongly enforced, individual behavior dominates.  Rational economic actors can actually trust government enough to concentrate on what they want to do.

Look at the leftmost comment on the positive skew chart.  “If a man won’t work, let him not eat.”  Pretty harsh, eh?  And yet somehow America has starved possibly the smallest percentage of citizens in history.  Almost as if moral, intelligent, generous people can tell the difference between “won’t” and “can’t”.  By doing only what’s necessary for those who “won’t” work, they lop off much of the left-hand tail.  That shifts everything to the right.

In current practice, statist government instead lops off the right edge!  (Well, apart from it and its cronies.)  Those dotted lines in each skewed graph tell you how many more people live in relative wealth, or poverty, in each approach.

So skew this economy the right way.