Requiescat in pace, bard of darkness and light.

Ray Bradbury has died, at the age of 91.  He was a giant of literature.

Instapundit singles out Dandelion Wine.  Let me add Something Wicked This Way Comes and The Halloween Tree.  And just about everything else he ever wrote.

I thought this site had praised Bradbury several times.  Nope.  Only in passing, though in a post that owes all to him.  And again there are tears in my eyes as I write.

Will add a NSFW link later, when not…you know, at work.  If you can’t wait it’s probably on YouTube, search F*** Me, Ray Bradbury.  Now that’s a fan!  There’s also a vid of Mr. Bradbury watching that vid, somewhere.

Goodbye, sir.  Tell Roger Zelasny that we still miss his darkness and light, as well.

UPDATE–Though disputing Ms. Bloom’s claim that he’s the greatest sci-fi writer in history (he was a fantasy writer above all) her enthusiasm is not in doubt.

His reaction seems about right: 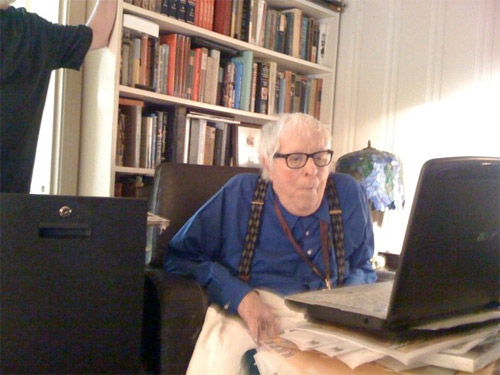 3 Responses to Requiescat in pace, bard of darkness and light.