Explode half a “Little Boy” in Washington D.C….

…this is what you get.

It’s an excellent summary of an urban nuclear detonation.  And here’s the full report if it interests you.

At 10-kT (equivalent explosion to ten thousand tons of TNT), this is either a “suitcase” nuke scenario or a relatively crude terrorist-designed device. 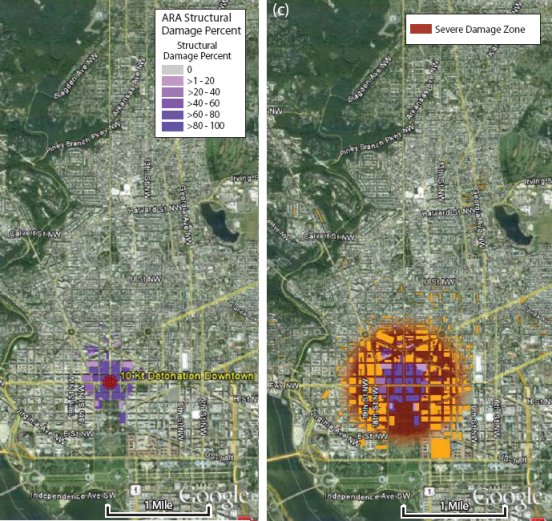 People tend to make over-assumptions about nukes.  This bomb wouldn’t obliterate a large town, much less a metropolis.  Some people within deep structures would survive even in the devastated zone.  Of course, if they came stumbling out immediately afterward they’d probably die a miserable lingering death from fallout, rather than a swift one from the blast.

Western civilization is in no danger from terrorists, even if any of us can be slain individually.  Society-threatening nukes aren’t suitcase weapons, they’re thousands of bombs thousands of times more powerful:

That was 57,000x the FEMA scenario.  Here’s a quick guide to the difference, the comparative fireballs:

Note that that is just the fireball.  Don’t think anyone is maintaining a monster like that today, though.   H-bombs, not Muslim terrorists, are the inspiration for Dr. Strangelove.  An event like this scenario is horrible beyond words, but our only existential danger is giving unfettered power to our governments.

14 Responses to Explode half a “Little Boy” in Washington D.C….