This morning’s dream:  a somewhat drunken, mostly undressed, very attractive redhead advanced on me with hungry eyes.  Obviously she needed dismemberment and incineration.

Now…before you dime me out to Dexter…I knew, with dream certainty, that she was right that second turning zombie.  When the Zombie Apocalypse comes and your only responsibility is to keep the damn door shut, what happens when I catch you strolling in from outdoors while making first-time-ever goo-goo eyes at me?!

Ginger had it coming.

I’m never afraid in my dreams.  At age thirteen I stayed up way past midnight reading Salem’s Lot.  And then suffered through an (apparently) life-threatening nightmare that’s vivid to this day.  Never, in the ensuing years, have I felt endangered in dream.

Thus the story skipped past whatever happened to Red.  I was outside in the night, Spiderman-taunting an unseen MasterEvil (which had wonderful voice effects).   Then the thousand-strong zombie horde shambled forward.

With the Dream Immunity Clause kicking in…great, my brain had to examine the acyronym…I sliced through the first ranks with a sword so keen as to be invisible.  Then I telekinetically flung the gallons of zombie blood at the teeming rotters while willing everything to burst into flame.

And then woke.  Bladder was tapping Subconscious on the shoulder saying, “wrap it up, I’m due onstage”.  This isn’t lucid dreaming…obviously…but loony works for me.

This was a prolonged prologue, and I apologize.  The proper answer to “do you want to hear about my dream” is always “NO!”  Followed by dismemberment and incineration.

Thing is, I woke up with an epiphany.  A Jungian archetype rose from the depths and imprinted on my surface mind.  I now know why “zombie chic” is ridiculously popular, and growing more so.  It’s not the obvious “contagious disease” metaphor.  That is, not fear of physical disease.

Western civilization is a whited sepulchre.

The more corrupt it gets, the more it hungers for innocent flesh, the stupider it gets…the more it paints itself as pure and compassionate and wise.  Tell me that’s not a bull’s-eye.

You know why the idea of Zombie Apocalypse keeps getting stronger?  We’re in the middle of one.  A world-wide contagion, not of flesh but of morality.  Succumb, or be consumed.  Be Taker, or taken.

Of course the Takers are touched by archetypes and resonances also.  It’s why they become increasingly obsessed with surfaces, with the physical.  Consider:  moral zombies who place your conscience beneath their desires are the very same people who ban cigarettes, demonize fast food, and take overweight children away from their parents!  Bodies are to be healthy and attractive.  Whited.

When Takers can’t feast on non-Takers they do turn on each other.  But that cracks the plaster.  Nudges the tomb door open a crack.  And the Taker catches a whiff of what it is, inside the cosmetic shell of plastic surgery and botox and deodorant.

Of course, as innocent flesh dwindles the Takers must redouble their efforts to get at it.  Have you noticed increasing, shall we say…loss of civility?  Mounting anger and fear and desperation in those calling for “sacrifice”?

Well, it’s just as futile to keep beating an undead horse as a dead one.  But here’s a suggestion.  When Takers demand that you give them what they want and do as they say, ask why.  Whatever the answer, mentally substitute the word  “braaaains”.

Tell me when you find a logical difference.

Finally, if you’re ever tempted to turn Taker, remember:  the sense of humor is the first thing to die.   And not the last. 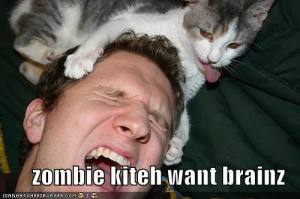