There’s a scientific reason for the insanity of “Blue Americans”

This is almost how Democrats and “progressives” see their opponents: 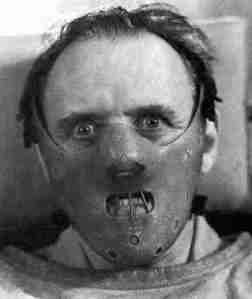 But unlike Lecter, they also feel we’re stupid.  How mouth-breathing cousin’-marrying morons can thwart leftist geniuses on a regular basis is never considered.  Too damaging to the enormous progressive ego.

Don’t hate them.  There are charitable and scientific reasons to conclude that “Blue State” activists are actually insane.

The American Psychological Association has a different view.  These shrinks believe they are the standard of mental health and that explains their monolithic political belief.  See, being an APA member not only qualifies you to address global warming (psst: you’re against it!); it lets you publish lingo-befogged “brain science“.

(H/T to Dr. Helen  for the link, also for being a non-wanky psychologist)

Here’s the last sentence of that abstract:   “A psychological analysis is also useful for understanding the political divide between “red states” and “blue states.””

So who do you trust?  The World’s Only Rational Man…or a bunch of politically motivated phrenologists?

The APA came to their conclusions by “psychological analysis”.  They compared red staters to people who share the APA’s beliefs and…surprise!  Obviously blue staters are normal and red staters have the screw loose.   But since when is psychology science?

Here, APA, let me show you how it’s done.  I’m gonna give evidence why progressives and leftists are nuts.

The following pics are courtesy of Wikipedia.  First…

Rats!  Well, rat anyway.  Nice lookin’ fella, and he seems pretty level-headed.  But if you put too many rodents together you get…well…this.  “Behavioral sink”.  If you don’t care to click, I’ll summarize:  city mice are more bonkers than country mice.

Rats are useful in research because of their many similarities to humans, right?

So unlike the APA’s, my hypothesis is rooted in nature:  overcrowded animals tend to develop abberant behavior.   So, between “city mice” and “country mice”, which seems more likely to be “behaviorally sunk”?

The APA mentions the Blue/Red divide.  Fine, let’s go there.  Remember the map?

This is actually by county.  The voting district chart, which I now can’t find, is even more stark.  In fact, I’d say population density is the best single indicator of which side of the “left/right” divide a person inhabits.

So, to review:  the more rats you cram into a given area, the more rat-f**k crazy they get.

And the more people you cram into a given area…the more progressive they get.  And if you don’t see the correlation…

…you probably live in a big city.  Back to you, APA.

(NOTE–Disparaging insults about mental health are intended solely for leftist activists.  I apologize to anyone suffering from psychological impairment who is not trying to enslave my nieces and nephews.)