Peggy Noonan thinks a billion times slower than the Worm…

…but hey, at least she can still think.

Here’s what I first knew about Obama: 1) he claimed fierce opposition to government waste, fraud, corruption, and secrecy, and 2) he was a Chicago-area Democrat.

Those two facts were enough for a preliminary analysis:

Your initial analysis?  Wait, you don’t do that.  Social critters have first impressions.  How’s that workin’ for ya?

In the ensuing years not one single thing has contradicted my split-second assessment.  Though other things have refined it. 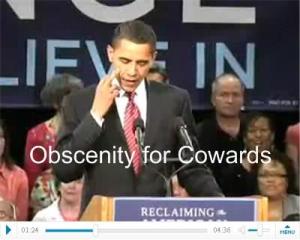 Now, take Peggy Noonan.  She’s a lovely lady, and much better than any Worm.  She’s highly intelligent, with decades of political experience.  Yet this paragon, until recently, believed of Obama, “He was supposed to be competent.”

Er…no, dear, he wasn’t.  Not to any rational being.  Why, because he said so?  Using that logic, a snake oil salesman is supposed to sell real panaceas.

But then you, Ms. Noonan, are supposed to spot obvious con artists.  Are you Christian, Peggy?  If so, don’t you know you’re commanded to be wise?  You’re not permitted foolishness without consequence.

And it was ever foolish to assume this President has competence at anything except networking and self-promotion.